See that face, it’s so cute right? Well that girl has done a number on my rugs. I have a lot of rugs around the house because we put done this lovely new floor and shaking a rug out is way easier than mopping floors.

We have a rug that sees a lot of action that’s in the entry to the side room. Tesla’s pen is in there.  We also spend a lot of our time in there, so that rug gets used a lot. There also happens to be a heating register right by the rug. Before we had Tesla, the rug would sometime slide over the heating register with use or when the cat ran over it, but since Tesla like to move at the speed of light, I never seem to be able to keep the rug where is should be now. 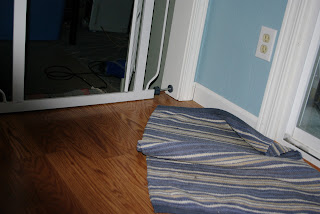 See the rug just won't stay where it should.

I saw an idea on Pinterest that had you add stripes of caulk to the back of a rug to help it stop moving around.  Seemed like a great idea to try with this rug since its already old. 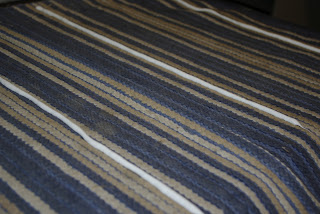 We had silicone caulk leftover from our bathtub installation that we did this summer. It was even still in the caulk gun and everything. Since I was not feeling very well, I called on the husband to actually apply the caulk while I took pictures. He just applied a couple of thin lines of caulk on the back of the rug. He followed the lines on the rug and stopped several inches from the ends. Since the rug was really old and cheap, I did not even bother to wash it beforehand. We just threw it up on the table, applied the caulk and let it dry overnight. I put the rug down this morning and the caulk actually helps! I think that it might be helpful to apply lines in both directions to keep it from moving. Tesla and Erik tested it this morning and it actually moved less and kept its shape much better. It has been fun to find ideas from Pinterest and actually try them out. I might need to do this to some of my other rugs that I have lying around. 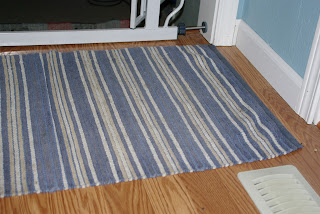 Posted by -HomeLifeScience at 10:31 AM