I was really surprised how expensive it was to frame artwork. I guess I thought that it would be similar in price to buying a frame at a store. Yes, I know that’s naive, but it’s my first house and up until now, all the artwork that I had consisted of posters pinned to the wall with push pins. 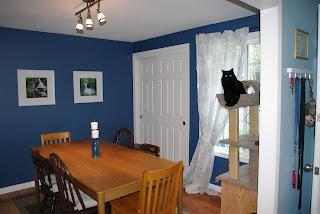 So you may have noticed that in our house there is a lot of colour. For example, when we painted our dining room, we choose a really rich dark blue. We were trying to break free of the white that had pervaded our old apartment. However, after painting the room twice! Yes twice!, we needed some colour to break it up. (On a side-note, when we painted the room, it took the entire gallon. After a couple of weeks I noticed that we had a couple of touch ups. I went to Home Depot and bought one of those tester bottles they had after the Home Depot employee told me it would match and was the exact same thing. I went home and touched up all the spots to find out that the tester paint only comes in flat, not the eggshell we had. So now I had four walls that looked speckled with dull spots on the shiny. There was not a good way to fix it, so we re-painted the entire room. ) 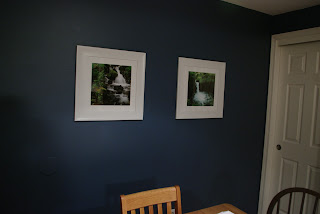 So anyway, after we repainted the room, we wanted to lighten it up some by adding some white. We thought that it might make the room feel a little less blue. Someday, we would like to add white wainscotting around the bottom of the walls. I had wanted to frame some of the pictures that Erik and I had taken in the past. Even though the pictures are not perfect, I think they look great, and we get lots of compliments on them. Honestly, I am not sure what would make a perfect picture. When we started to look at getting the pictures framed we were floored to find that places wanted more that $100 dollars a picture. That seems way to high for us. 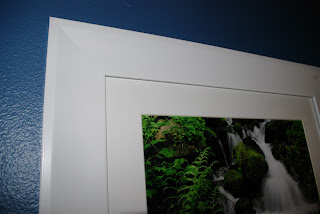 We decided to go the cheap way. We went to Joann's and found these great wide white frames. The frames has some nice understated detailing that complemented the rest of the room. The frames were even on clearance, so with Erik's extra 15% off teacher discount we got each frame for $9. The frames were originally meant for a collage of smaller pictures. We took out the frames and measured the opening. Since the opening was 13 inches square, I went to Costco and printed the pictures on the 12 by 12 scrap-booking page size for $2.99 each. I called around and found a small frame shop down near our house called Framing for You. I took one of the frames down there and asked them to cut a mat for the picture. It was great, she cut the mats out of scrap mat-board and only charged me $5 a mat! I was also impressed by how quick and nice she was. 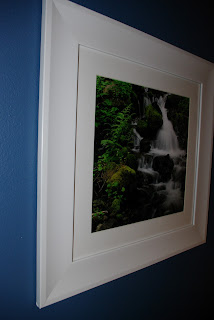 I slapped the mats, pictures and frames together and they looked great. So in the end, I had our art work matted and framed for:

$9-Frame
$3-Picture Printed
$5-mat-board
Total: $17 a picture!
It also felt really nice to support the local frame shop, even if it was only in a small way. The pictures look great and for only $34 dollars we have a nice wall of art that does not look too busy or detract from the great blue colour in the room.
Posted by -HomeLifeScience at 8:11 AM