We are taking a break from house stuff today and talking about my great family!


So this weekend was the 2012 Basketball Games for Special Olympics in Hillsboro Oregon. I love this time of year, because every year my mom and my sister drive out for her games. It’s great, we have a blast watching the games, and I don’t have to drive six hours to see my family. My twin sister is the shortest one on the team, but she is fast! This year my mom coached a 3 on 3 team. She originally had four girls on the team, but one of the girls got sick and was unable to make it. With three players, we were a little worried that they would be exhausted as they had to play three games in a row without and breaks or relief.

The team did great and won two games and lost one. They played really hard even though they were exhausted. I was yelling so much my throat was sore. At one point, my husband has to run to the store to grab a knee brace for my sister so she could still play. Nothing was going to stop her. My mom did a really great job this year training them on their plays. You could tell that it was that training that helped them do so well even though they were down a player and really tired. 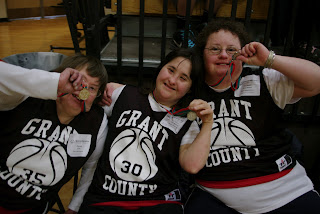 Also, a quick note; I believe strongly that we should stop saying the word Retard. It’s demeaning, disrespectful, and quite honestly just a stupid word. People only say it to say something negative. I believe strongly in the mission of the group, Stop the R-word. If you want more information, go to www.r-word.org. They have lots of great information about how to let people know that the word is hateful. Beside, it the federal government can pass a resolution to take that word of its use, I think that people can to. It’s no longer ok to say racist terms, or sexist words, let’s take the derogatory words about people out too.
Posted by -HomeLifeScience at 8:05 AM