I was on Pinterest looking for ideas for yard decorations. As I was doing so, I remembered seeing tea cup bird feeders at the Farmer’s Market last year, and thinking that I could do that at home. The bird feeders were recycled tea cups and saucers on poles to stick in your backyard. I searched on Pinterest and found a couple of examples. They come in lots of varieties, but all function the same. For some they include a spoon for birds to rest on, others fill both the cup and saucer with seed, while some fill the cup with water and the saucer with seed. Some people placed the cups on their own little stands using PVC pipe or copper tubing, while some suspended them from wire to hand in the trees. I fell in love with the idea. I like garden art, and a chance to make my own little something for the backyard felt great. 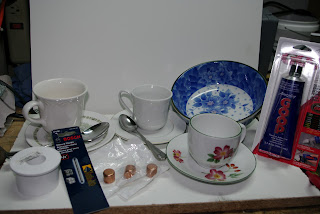 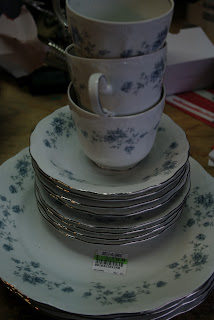 To gather all of my supplies I went to a couple of different stores. I already had on cup and saucer that I had picked up in College in some sort of vain hope of having lovely tea parties that never seemed to pan out, and since I don’t drink coffee or tea that much, it never really got used. To pick up more cups I went to Goodwill and the Salvation Army stores. The Goodwill store had a whole shelf of matched cups and saucers, however the cheapest, ugliest ones were starting at $6. I did not want to spend that much on something going into the garden, so I made my own set my picking a really neat saucer from the single dishes pile, and nice cup from the mug wall. I made two sets this way, one costing $1.50, and one costing $2.00. Afterwards we went to the Salvation Army where everything was 50% off! I picked up a matching cup and saucer from Japan made in 1961 for only $1.50. I also picked up a pretty blue Bavarian china set that had 4 dinner plates, 4 dessert plates, 4 saucers, and 3 cups at half off for only $6.25. We were going to just go donate the extra plates back to the Salvation Army, but we thought it might be fun to eat off of nice china for a while, so we kept them. I also got a medium sized blue china bowl that I thought that I would make into a standalone bird bath. I picked up the Goop at Home Depot for $4.99. I also got a 6 ft. length of ½ inch pipe for $5 as they did not have the 10ft pieces in stock, and only had cut piece left. I picked up a second copper pipe of 5 ft. for $7 the next day at a different Home Depot. I picked up several ½ inch copper pipe caps for $0.67 each. Because I was worried that the bird bath might need a little more stability I decided to go a wider route. To achieve this, I bought a flat ¾ inch PVC pipe cap for $1.20 and a 10ft. length of ¾ inch PVC for $2.15. I also purchased a small drill bit that would fit in my Dremel and drill through China. 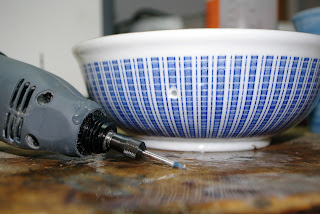 I drilled a small hole in the side of the bowl about half way up, so that the bowl could never overfill. I also did this because I had heard the birds won’t use birdbaths that are too deep.  I tried to drill a hole in the saucers, but that turned out to really hard, so I just left them as they were. 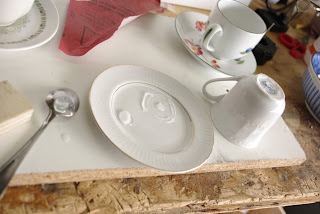 I glued the cups to the saucers with the Amazing Goop and left them over night to dry. To do this, you first apply glue to both pieces that you want glued and then let them sit for 2-10 minutes.  At this point, I also glued the spoons onto the pieces that I thought that the spoons would look great on. I lightly sanded the copper caps and then the bottom of the saucers to help with hold. I then glued the copper caps to the bottom of the saucers. 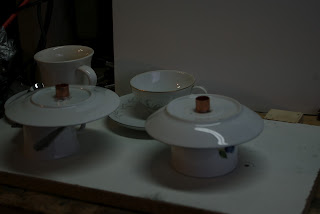 On one of the cups and saucers, I used PVC pipe. Prior to gluing the PVC pieces on, I spray painted the pipe and the copper with Oil Rubbed Bronze spray paint.  I then glued the cap to the bowl or saucer. I also cut the bottom of the PVC at a slight angle, so it would go more easily into the dirt. These pieces were actually really sturdy.
It’s funny, I should have taken more pictures of the finished projects, but I gave two of them away already and it’s been raining a lot lately. Here is a shot of the some that I have in my backyard right now. They are really study and have been through a storm already and survived. The only weird thing is that when there is water in the bottom of the saucer, the cup and saucer can come apart with a suction sound. However, when you put them back together and let them dry, they are solid again. So I just left them alone after the rain and they dried out just fine. They birds have already been using the water bath parts and it’s been great. 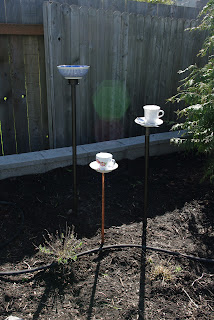 Posted by -HomeLifeScience at 9:55 AM