DIY Terrarium from a Glass Globe

So I really like small dainty home décor items. I have a million small plants in small cute pots. I have lots of little candle holders. You get the idea. One of the ideas that I had seen pop up a lot lately is a resurgence of old school terrariums. Since, plants and I stuggle to get along, I mean seriously, them come to my house to die, a terrarium seemed like a nice little thing to make that would essentially be self-self-supporting and contained. I liked it! It's the same reason I love those glass water globes that you can buy at Home Depot. They have saved many a plant.
﻿﻿


My husband actually made the whole project for me as a present. I was busy working on sanding the chairs and cursing their existence. He got the idea from some of the things I had shown him on my Pinterest page. I had purchased the globe to make a bird feeder, but he snagged it up claiming it for this project before I could use it. I purchased the globe from the Habitat for Humanity store for $0.50. Nice deal right?  To make the stand, he used scraps of wood. He free-handed making the stand by cutting three small pieces that were taller on one end than the other. He then sanded them down to make them smooth and glued them together with wood glue and a clamp. He spray painted the final stand a brown color that comes up often in my living room.
﻿
To make the terrarium part that holds the plant, he layered soil, sand, and coconut fiber for the plant bed. To make the first layer, he cut a piece off of a coconut fiber planter bowl that was $1 at the Dollar tree. He then mixed a small container of backyard soil and sand together. This helps with soil drainage.  He layered the dirt onto of the coconut fiber and tried to make it level. To decorate the terrarium he picked some rocks out of our yard and one of the neighbors rock driveways ( shh don’t tell).
﻿﻿﻿
For plants, we went around the yard looking for small delicate weeds and moss. Yup, we transplanted weeds, but as my husband noted he only picked the prettiest ones that since they are weeds would be really hardy. See he was looking out for me and trying to pick the survivors. The moss looked great next to the rocks, and the little grasses and flowers complimented each other really well.

So far it’s been a week and the terrarium is still alive and the plants look great. The little purple leaves on the front plant have curled some, so I make take those out. The moss is still alive and looks great. Its been fun to have the little planter. Right now it’s sitting on my bookshelf next to my phone charger so I see it every day. It was a nice gift from my husband and a really easy project to make. Total cost for $1.50! Even if you had to go out and buy the dirt and sand, since it takes so little you might be better off just buying a potted succulent. The rocks were just found items, but some of the terrariums that I have seen have all kinds of pretty figures and stones in them. I really just like the simple natural look of this one.﻿﻿ 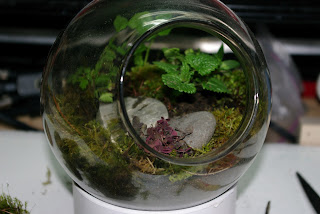 Posted by -HomeLifeScience at 7:51 AM