So this year has been very crazy and I feel like I have not had much time to sit back and celebrate some holidays.  I take holidays very seriously and love any chance for a good celebration. I decorate in some way for pretty much any holiday or reason. I just like having all the bright colors around and changing out decorations. I think that I might start a new decorating trend where you leave up your holiday decorations year-round for all the holidays. This would be some kind of Christmas, 4th of July, Halloween, mash-up. Sounds like a great house! Anyways, due to being so busy, I have not had a chance to put up any decorations for Easter. I poked around for a fun easy craft and found a site (http://www.simplymodernmom.com/2011/04/yarn-egg-surprise-tutorial/) that had directions to make these cute yarn eggs. I did not have any mod-podge, but I had some Elmer’s glue and a lot of yarn. 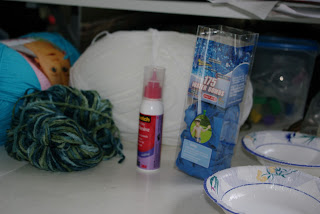 So to make the eggs, I gathered all my supplies. I used paper cups as stands for the eggs, paper bowls to hold the glue, yarn leftover from other projects, and wax paper to protect the surface. I stopped by Target and picked up a container of water balloons. This was the only part of the project that cost money, and it set me back $3, besides now I have a nice stash of water balloons for the future. 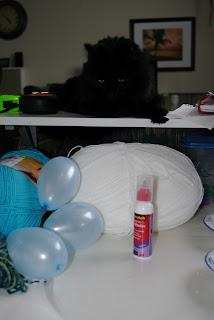 I mixed the glue with some water to make it a little thinner. After I mixed the glue, I carefully blew up the balloons. That was the hardest part. The balloons kept popping, or my cat Schroder would helpfully bat them around until they popped.


After blowing up the balloons, I cut a length of string that was about 4 arm lengths. I took the string and dipped it in the glue bowl. I then squeezed the string to get all the excess glue out, and started wrapping it around the balloon. I noticed after my first one, that I had left an area around the balloon end mostly free, so for the next ones I tried to really fill in that space. I placed the balloons on paper cups to dry and cleaned up the mess by throwing it away. 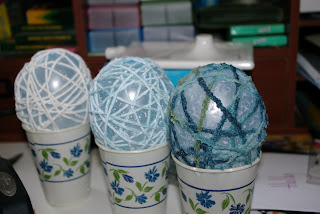 I let the balloons dry for 24 hours. The next afternoon, I popped each balloon with a pair of scissors and then picked the balloon bits out. One of the balloons made the saddest sound and sucked the egg into a small ball. I thought for sure that it was ruined, but I was able to reform the egg. It’s not the soundest one of the bunch, but it still has an egg shape.

The eggs had a great shape and were not as delicate as I thought that they would be. I put them back in their cups for a while so that the slightly damp spots could dry. 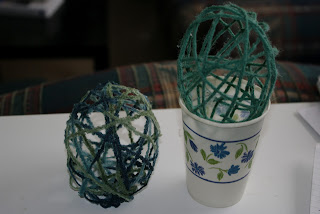 After the eggs were completely dried,  I put them in a bowl that we had. The bowl was a wedding present and has some nice color to it. The eggs look like a lot of fun. The cat is especially interested in them. I am sure when I get home the eggs will be strewn around the living room. I am not worried though because they seem really sturdy. My tips for this project are: 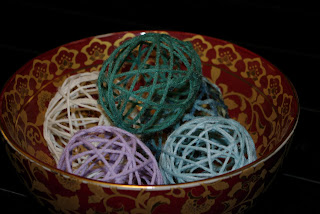 1.       Use Mod Podge. I think that would work better than Elmer’s glue. The glue was clumpy and shows in spots on the eggs. 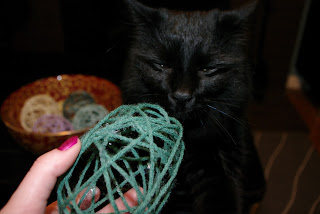 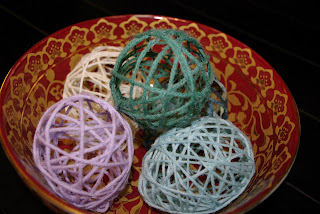 Posted by -HomeLifeScience at 8:08 AM