For Mother's Day, Erik and I wanted to make a nice gift for our Mom's that they would appreciate. I spent some time looking around on the internet and Pinterest, but I actually found our inspiration at the local Farmer's Market. There was a guy there who sold glass garden art. The art was made from old glassware shaped into glass flowers. Since we had given our parents the bird-feeder tea cups for Easter, we thought that they might like the garden flowers for Mother’s Day. Now we just need to find a present for Father’s Day.

Once we had picked a project, I did some searching on the internet for ways to attach the pieces. The guy at the Farmer’s Market had drilled a hole through all of the plates that soldered on a metal backing. That just was not an option for us. Getting all the stuff needed for soldering on the back would be expensive, and we had tried drilling holes in glassware before and did not have good luck with that. I found a two websites that had used a metal to glass glue for the back and then used Silicone glue for gluing the plates together. We decided to go that route instead. 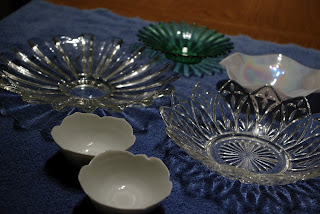 We first stopped off at the Salvation Army to pick up our plates. Erik and I each picked out the plates for our own Mom. It made it fun because they had a different look to them. I picked a large glass candy dish that looked like it had petals, along with a smaller green glass dish. Erik picked a large clear plate and a milky-white bowl. We picked up some small matching white bowls for the insides of our flowers. All of the plates together cost us $18. 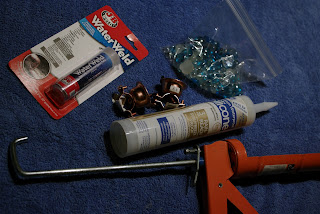 To make the glass pieces stick together, we used a tube of the GE Silicone for outside. We picked up a big tube for $7 at Lowes, and already had the caulk gun. So that made it a bit cheaper. We also picked the clear version, in case any was visible from the sides. We placed caulk generously on the bottom of the smaller and smallest bowls and then set them inside of each other. My middle bowl fit perfectly into the bottom of the larger bowl, which made the gluing really easy. Erik’s bowl was a little smaller, so it moved around a little. I found some glass beads from a plant project, and we arranged them in the smallest bowl and glued them down. I filled the bottom of the bowl with glue and nested each bead inside, while Erik put glue on the back of each bead and put them in the bowl.  They had a slightly different look to them, but both ways kept the beads in nicely. 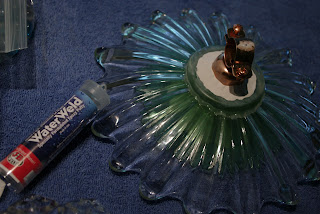 To make the glass flowers actually stand on a pole and look like a flower was the hardest part. One of the options I saw used a bent fork glued to the back of the flower then dropped into a pipe. I thought that it made the flower look like it was leaning though.  I also saw some flowers that were glued to the pipe directly, but that makes it hard to move around and not much surface area to attach to.

We finally settled on using these copper “bells” that were suggested on a website. She found them at Lowes, and they are a “bell” attached to a pipe holder piece. We also found metal epoxy putty that could be used underwater. I was concerned that the epoxy would not work, but it works amazing! You take a chunk and mold it in your hands mixing it. Then we rubbed it into a long thin strand that we smoosshed (yes that’s a technical term) around the edge of the bell onto the glass. I did this twice to make sure that there was a lot of coverage area.

We let the flowers dry overnight and then we shipped off to our amazing moms. They both liked the flowers and that we had made them something nice ourselves. I liked the flowers so much; I actually made two for myself. I made one for the support pole for our tiny blueberry, and I made the other one for some leftover copper pipe that I had from the bird feeder project. The flowers look great and have stayed together through the rain, wind, and sun. Hey we live in Oregon, so spring brings lots of weather quickly! 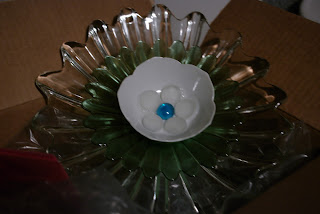 P.S. Looking for more information? Look here: http://www.homelifescience.com/2013/05/glass-garden-flowers-update.html
for pictures on the completed project!
Posted by -HomeLifeScience at 6:57 AM