Since we have been working like mad on our backyard Pergola, my Master's thesis, and the upcoming school year, its been really tough to find time to make fun things for the house. It's not that my Master's thesis isn't the light of my life, but it's just not full-fulling that DIY itch, in fact it might be pushing me over the edge! I did have some time to make some fun little planters though. The project was really an after thought, but I think that they made the cutest little planters and I thought I would take a break from number crunching to share them with you all! 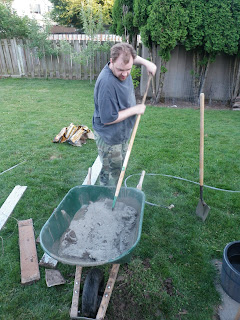 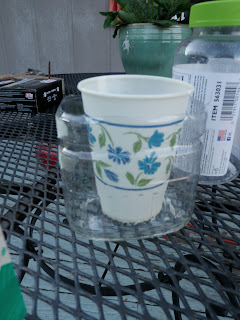 Previously I had seen people make concrete planters on Pinterest using concrete, pebbles,vermiculite, and sand. The projects looked great, but I did not want to spend any extra money on it. However, due to time and effort, I just thought that I would make a planter using containers in my recycling bin and the leftover concrete from our Pergola. We had to sink out brackets for our Pergola posts in concrete and Erik let me mix the extra powder for my project. 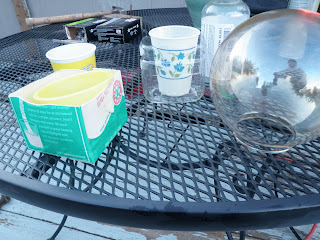 So to make the planter, I grabbed the plastic containers that I had in the recycling bin. I cut the tops off of the taller bottles and tried to find smaller containers that would fit inside of the to make the hole for the plant. I was a little concerned that the bottles that I had would be too small, but I went ahead with it anyway. I cut the top off of a used oil bottle that we had. I very lightly sprayed the insides of the containers with cooking oil to help them not stick to the concrete. 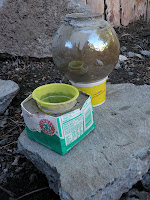 I gently filled the bottom two-thirds of the plastic form for the planter full of concrete and then very scientifically “jiggled” it around to remove any air bubbles. I took the smaller container that was going to make the plant hole and pushed it into the concrete. For the oil bottle bottom, I used a small Dixie cup. To keep the cup deep, and not allow it to float to the top, I put some rocks in the bottom of it. I did the same thing with my milk carton planter, however I used an old egg dipping container from Easter as the inside. 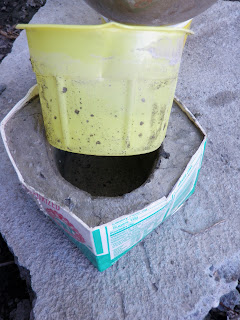 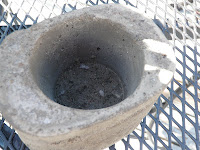 I put the containers out on in the garden area and then let them dry for two days. I wanted to let them dry for a while, but still be flexible enough for me to remove the inside container. I gently pulled out the inside container, and then cut away the outside container. Spraying them with oil seemed to actually help them not stick. To help clean up the bottom of the plant hole, I scrapped it with a screwdriver to make it more flat and a little deeper. Since the concrete was not dry yet, it came out pretty easily. 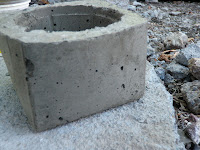 The Final Product turned out really cute. I went to Home Depot and picked up the smallest succulent plant that they had there. It was only $2.98. I really like the pot details on the oil bottle. The design on the bottom of the bottle looks really great as a planter and really stands out. So cute fun project and it only cost me the cost of a plant, which is pretty amazing considering I have to buy plants in bulk since I let them die so often. I am rooting for this little guy though! 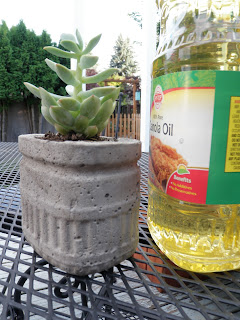 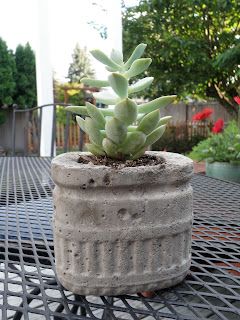 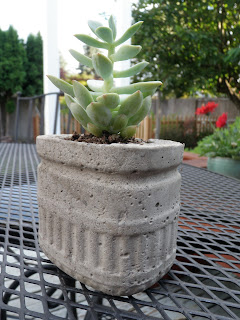 Posted by -HomeLifeScience at 7:39 AM 9 comments

So this last weekend was the Oregon State Track Games for 2012. They were held in my old stomping grounds, Newberg, Oregon. This year the weather actually decided to cooperate and be a little nicer. Last year is rained buckets and the athletes look so miserable and soaking wet! The weather was a little warm on Saturday, but there were lots of tents to keep us cool.

Anyways, on to the good stuff. So this year my sister competed in two events, the Softball Throw and the 400m walk. I have to tell you, that girl throws a mean softball. Plus, the people at the softball tent were so nice. There was the cutest little boy who was helping out and encouraging all of the athletes to throw as far and as hard as they could. He had a constant stream of encouragements and tips. Not sure where he got all that amazing energy!

Hope placed 5th in the event, which she was disappointed by, but that only last for so long. Afterwards we went and hung out at the craft tent making bracelets, buttons, and shooting rockets. We also got to meet some really nice police horses and a drug sniffing dog. My mom was asking lots of questions, so we had to give her a hard time about the drug sniffing dog.

At 1 pm, Hope had her big event, the 400m walk. Man she was ready to go! We were worried because it was already really warm, and one of the other girls had told her that she was going to win instead. So Hope really needed to focus, and focus she did. She moved and grooved way faster that I could have and got 1st place! We were so excited! That girl is super fast, even with two knee surgeries. I might have to make her my personal trainer to get into better shape.

We also saw a bunch of people that we had essentially grew up with. It was fun, we saw Joshua, who had gone to pre-school with Hope. It’s weird to think that we have a birthday coming up and we are getting older.


All in all, Hope did great and the Games were a blast. The State Special Olympics did a great job this year with Track and it was nice that it was not so rainy. Looking forward to next years games!

Posted by -HomeLifeScience at 8:39 AM 1 comments